It’s always nice to get the most out of the professional photos you have done. No, I’m not talking about using your wedding photo as your Linkedin profile. (You know who you are and it’s time for you to visit us at the studio).

I’m talking about professional photos that tell your personal brand story. You can leverage the photos from your shoot in many different ways, resulting in a great return on investment.

I’m going to use a recent editorial shoot we did for Christopher Kelly, owner of a Sandler training centre franchise located in Toronto, as an example. 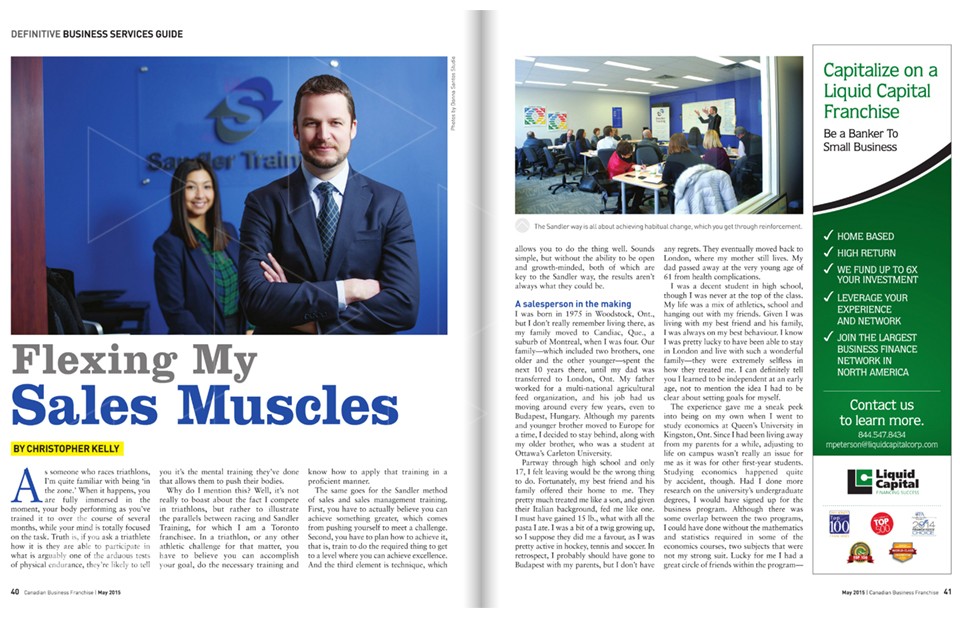 These were the photos used in the opening spread of the magazine article. Christopher also used the photo on the left as his Facebook page profile picture.

For over forty years, Sandler has taught its distinctive, non-traditional selling system and highly effective sales approach, which has helped salespeople and sales managers take charge of their sales process.

Christopher’s consulting and delivery is rooted in the Sandler methodology, which he puts to good use as he assists his clients increase their levels of performance in the areas of sales, sales management, and business development.

Christopher wanted some photos taken for a Canadian Business Franchise Magazine article he was being featured in. The magazine’s editorial offers a unique, behind-the-scenes look at those entrepreneurs who have embraced the franchise lifestyle and have parlayed their passions into a thriving business. 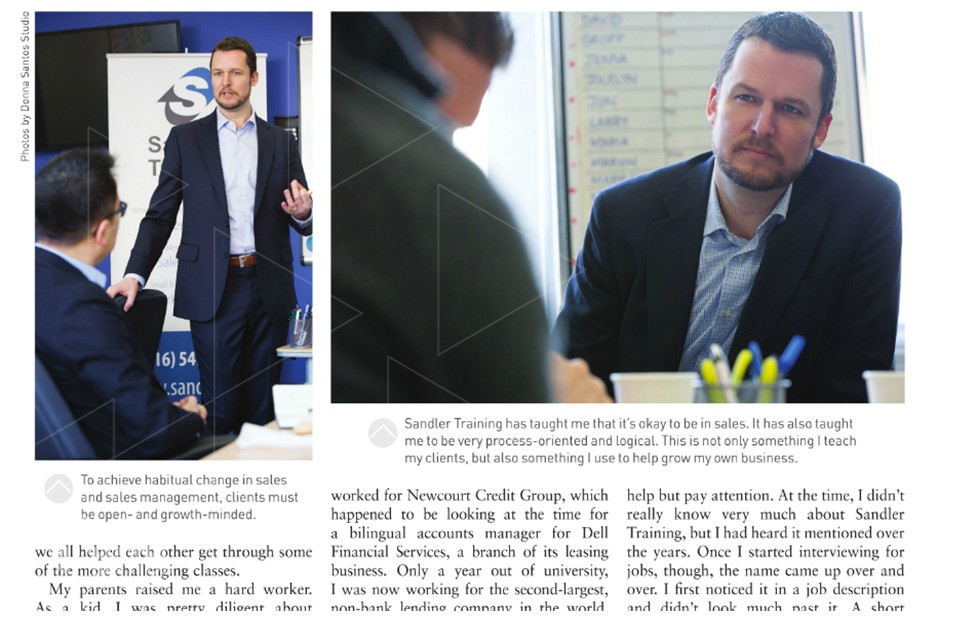 Here are other photos from the shoot that made it into the magazine article. They show Christopher in his element, providing knowledge to his clients via his workshops and sale courses.

The first step in the photo process was an in-person consultation with Donna. During the consultation Donna and Christopher discussed what story Christopher wanted to tell through the images. They also considered what other potential visuals, in addition to the shots for the magazine, they would be able to produce since Donna would already be on site and his trainees were willing to be photographed.

They came up with a mix of professional portrait, fly on the wall, editorial and slightly staged shots. All the photos showcased Christopher and his training centre in action. If you’d like to see the full article click here

Our 4 hour photo shoot produced 100+ unique images that are story driven and brand focused. Christopher will be able to use photos from this shoot for years to come – as long as he doesn’t shave off his signature beard. 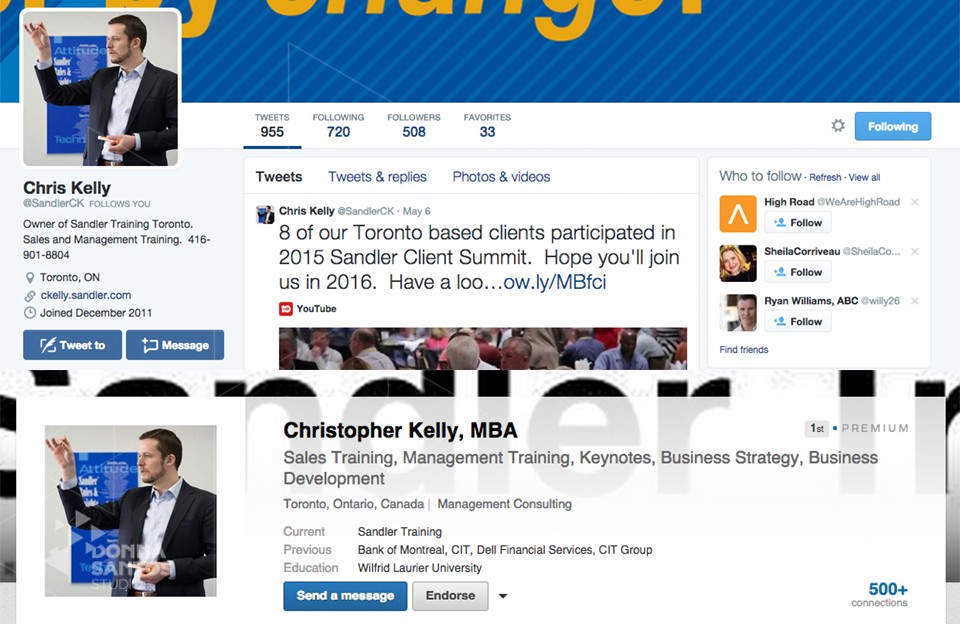 Christopher was able to use a photo from his shoot as his Twitter and Linkedin profile photo.

Christopher was able to use the photos from the same shoot as his profile picture on his Linkedin & Twitter accounts. He also re-used the photo from the magazine article as his Facebook profile.

Christopher does a lot of corporate training where he presents to thousands of people. He could impress a crowd with a Power Point presentation filled with professional grade images. Or create a short video to give his audience a feel of what his training sessions are like.

Going forward Christopher could also use the photos in his marketing materials such as email newsletters or his workshop booklets. His headshot can be re-used on speaking engagement and conference literature in the future too. 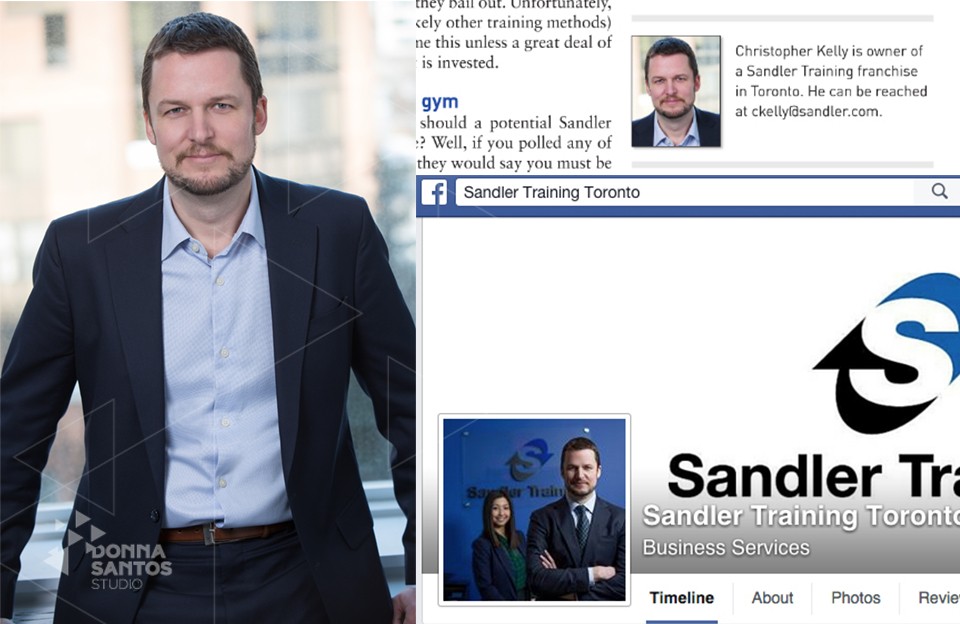 Here are some examples of the different ways Christopher used his photos. The large photo on the left is the original photo from the shoot. It was used again as a headshot at the end of his magazine article (top right inset). The photo that was used in the magazine spread was re-used as his Facebook page profile (bottom right inset).

Lastly, the photos could be re-purposed to spice up his web site. In a future post I’ll be touching more on the different ways to use your photos on your website. Sign up to receive our newsletter here or scroll to the bottom of this page and input your email address to subscribe – so you won’t miss it.

As you can see there are endless ways to use the images from your photo shoot.
If you are interested in getting some new photos taken contact us here. We’re ready to assist you in putting together your new visual story.